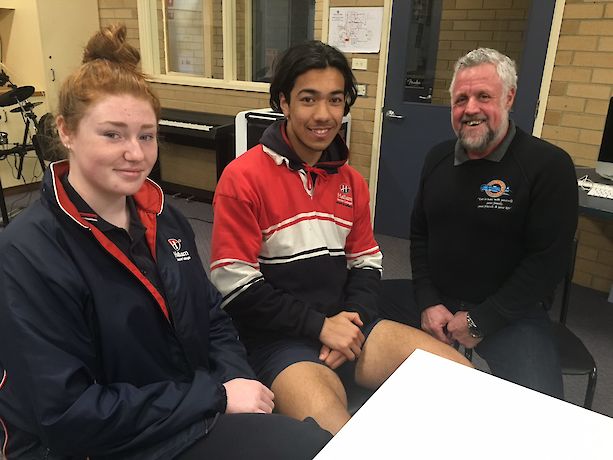 On 10am Friday 19th of October, David was on ABC Gippsland to talk about Call Me Dad and the upcoming event. ABC Gippsland had this to say on their facebook page:

When founder of the Heavy M.E.T.A.L Group David Nugent realised that his family were 'walking on egg shells' around his frightening temper, it was nearly too late. He was on the brink of losing his wife and family. That was 25 years ago. Thankfully David found a counsellor who encouraged him to attend a Men's Behaviour Change Program, that would ultimately change the course of his life.

After realising that there were limited counselling services, funding and support available for men who had anger and entitlement issues, David became a counsellor himself. It was a journey which would take him from fielding telephone calls from men in distress, to founding one of the most long running, respected and comprehensive Men's Behaviour Change Programs in Australia.

Now a qualified psychotherapist who specialises in family violence, David runs the Heavy M.E.T.A.L Group (Men's Education Towards Anger and Life). The program has been running for the past 15 years in the Casey Shire, and supports people from all walks of life dealing with communication, anger management and family violence issues. As the nations only 40 week Men's Behaviour Change Program, David's outreach extends to greater Melbourne and other parts of Australia, where support services are unavailable. Many Gippslanders have made the trip to the outskirts of Melbourne to attended David's powerful and effective programs.

In 2015, Heavy M.E.T.A.L was the subject of the candid and confronting ABC TV documentary 'Call Me Dad', which followed the stories of participants from the program, unpacking some of the complex issues behind systemic family violence. (see trailer below in the comments section).

As the Casey shire reports one of the highest rates of family violence in the state, David also runs preventative programs for local high school students. This year David has partnered with Hallam Senior College, as part of their Vcal program to put together a community awareness event on the impact of family violence with year 11 students.

This community fundraising event will take place on Thursday 1st November 7-10pm at the Hallam Senior College Theatre, and feature a screening of the 'Call Me Dad' film followed by a Q&A session with documentary participants and family violence workers from the shire.

All funds raised from the screening will go towards continuing the Heavy M.E.T.A.L program, (which doesn't receive any government funding), and go towards supporting women and children who would be otherwise unable to access the group's support services for women.

Tickets for the Call Me Dad Communit Screening are available from https://www.eventbrite.com/e/call-me-dad-community-event-tickets-49927128385