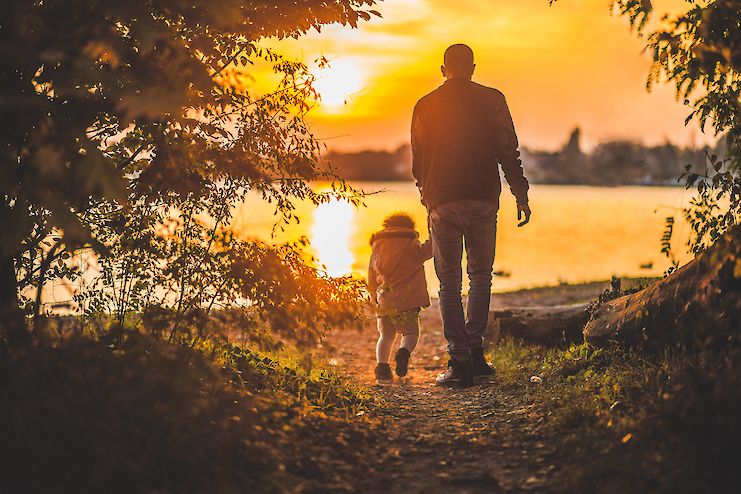 In a traditional sense, a male assumes the primary role in the family providing not only an income, but a safe environment while engaging in a relationship with his family. Times have certainly changed and every family dynamic is unique. In additional to the traditional 9-5 working dad we have stay at home dads, dads who work part time, dads who work from home, dads who work full time and dads who do a bit of everything. It is what works for each household. What hasn’t changed however is the need for a man to develop a strong bond and relationship with his children and to be a positive role model.

We hear the phrase ‘It all starts at home’. Our kids get a formal education and may learn how to read and write at school, but their values, morals and general qualities are all learnt at home. In the case of a father & son relationship, the son looks to his dad to lead by example. How you treat women for example becomes the way a son will look at and view women in years to come. He sees the world through his dad’s eyes. Most boys grow up to be respectful, courteous, trustworthy and have good morals and values. No one is perfect, and they may find themselves in trouble sometimes and make poor choices, but it is a part of growing up and learning lessons. Where they can become confused along the way and need to look to their father most, is the issue of masculinity.

Masculinity and what is thought to be acceptable has also changed over time. Dads were often viewed as people that spent their weekends tinkering in their sheds or heading out fishing. They always had a beer in their hand, were protective of their daughters, proud of their sons, didn’t talk about their feelings and never ever cried. To break outside this general mould was seen as not being manly enough. Men went out and put the food on the table. They helped with discipline and left the rest to the mother, especially anything to do with feelings. This traditional stereotype that men can still even today feel pressured to adhere to today, is referred to today as ‘toxic masculinity’.

This is where the role of Dad becomes vital in his relationship with his son. Without his dad to guide his son on masculinity, the son looks to his surroundings and his peers instead. He needs to feel he is loved and valued and home. He needs to see that his mother is valued and treated with love and respect, even if they are no longer living together. While you can tell a son how he should be behaving, he does not learn this through words. He learns it through behaviour. It cannot be a case of ‘do as I say, not what I do’. It has to be led by example.

When a positive influence is absent

Not every household has a dad as again every family situation is unique, but a young boy will look to an older male role model in some way. Without this, he will start to look toward his peer groups at places like school and learn from their behaviours. In an all-male environment, someone naturally assumes the role of a leader. The other boys or men will look to this individual as they set the tone for the entire group. If the tone of this group is more a toxic culture without the base foundations of respect and care, they will soon start to display similar behaviours in order to gain the respect of their peers. This can be things like being rude to the girl they like, talking about girls in a disrespectful way and perhaps even engaging in physical violence. They start to become distant, quiet and don’t express their feelings. For them to do so would mean they were ‘weak’.

How often is a boy told ‘Boys don’t cry!’. While seemingly harmless and not intentional, it is starting this trend of expectation. Being told for example from a young age that ‘Boys don’t cry’ is putting an expectation that if they cry, they are not acting like a boy. When boys are physically violent with their siblings it is automatically written of as ‘that’s just boys’. Kids are human sponges. They absorb everything around them, especially behaviour. It cannot be cured by words, but by a positive influence. If they feel cared for, respected, safe and loved by their dad or father figure, it sets the tone for their behaviour later in life.

Joining a sporting club is not only a great way for father and son bonding, but it is a great way to instill these values early on. There are a lot of dads and father figures involved giving encouragement, providing a safe environment and providing a shoulder to cry on when things don’t go their way during a game. It’s no longer about who kicks the most goals in footy and who gets the most tackles, it is about who showed sportsmanship and gave it a good go. There is a misconception that sports make kids tough in the same way there is a misconception that dads are not directly involved in the emotional upbringing of their children. Like in the same way that the traditional role of dad has changed, this misconception needs to change as well.

The important role of a divorced dad

Studies indicate that your child's relationship with their father will affect their relationships for the rest of their lives. What a child sees their father adopt as acceptable and loving behaviour, the child will not only pick this up, but project this in their future relationships. This is why it is important that from the very early stages, the father should engage in an affectionate and supportive relationship with their child. What if though, Dad is not around all the time? In modern society, there are a lot of households with single parents. Courts are recognizing the significance of a father's role in their children's lives and instead of the traditional every other weekend custody agreements, Dad's are getting more time with their children - even to the point of 50/50 shared cared now becoming the norm. Even if the father cannot be around the child all the time due to these reasons, it is still important that they retain an active role in their child's life. At around the age of 11, a son goes through what is a called a transition period as they enter their teenage years and start to discover a more sense of self. They look more to their father rather than their mother for help finding their identity during this important time. A dad does not have to be living with their son to be able to provide this mentoring. As long as the father uses his allocated time to show his son role model qualities and spend the time bonding and connecting on an emotional level, the same result can be achieved. It is not about quantity, but about quality. Quality time with their children.

What about when a new father figure enters the picture? If a man enters into a relationship where the woman already has children, it is important for him to instill these qualities when around the children and to set a positive example. It is not just about dating a new woman who happens to have kids. It is about gaining a new family and new responsibility. While he may already have his own children, the man must step up and take on this responsibility for her children as well as he ultimately becomes an important role model to the kids. They will look to the male (especially boys as they grow older) to fill in that gap while they are not with their Dad. They still need to be a part of a positive, supportive and nurturing environment where they feel safe and comfortable. Providing strong and consistent love from both males in each household is essential to their emotional well being now and in the future. All they need is to feel is loved and supported no matter which house they are staying at that week.

What qualities should we be instilling into our children?

This is just to name a few. What qualities do you think we should be instilling in our boys to become good men?