True friends are there for you anyway, and so here we are 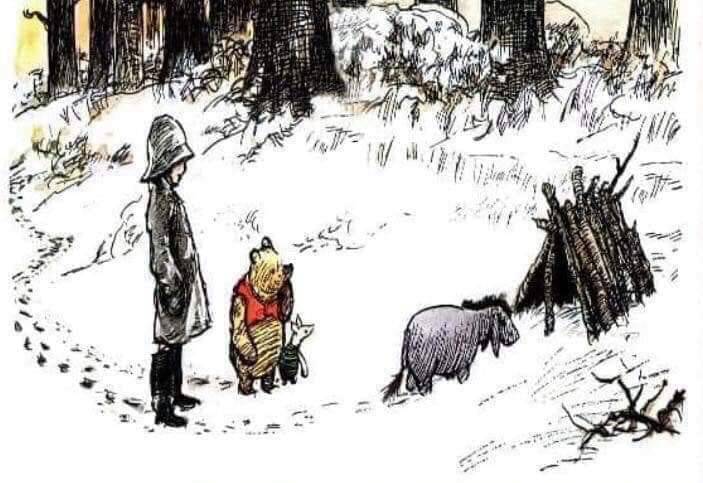 It occurred to Pooh and Piglet that they hadn’t heard from Eeyore for several days, so they put on their hats and coats and trotted across the Hundred Acre Wood to Eeyore’s stick house. Inside the house was Eeyore.

“We just thought we’d check in on you,” said Piglet, “because we hadn’t heard from you, and so we wanted to know if you were okay.”

Pooh looked and Piglet, and Piglet looked at Pooh, and they both sat down, one on either side of Eeyore in his stick house.

Eeyore looked at them in surprise. “What are you doing?”

“We’re sitting here with you,” said Pooh, “because we are your friends. And true friends don’t care if someone is feeling Sad, or Alone, or Not Much Fun To Be Around At All. True friends are there for you anyway. And so here we are.”

“Oh,” said Eeyore. “Oh.” And the three of them sat there in silence, and while Pooh and Piglet said nothing at all; somehow, almost imperceptibly, Eeyore started to feel a very tiny little bit better.

Because Pooh and Piglet were There. No more; no less.